Performing and winning across the water

I had been looking forward to playing in Ireland and Wales big time, and I had prepared well. Unfortunately, I found that the hard wind was hard for me to cope with… and was not able to adjust quick enough to play well in this first tournament. In a playing field of about a 100 boys and girls, I learned a lot and got even better prepared for the Irish Open. 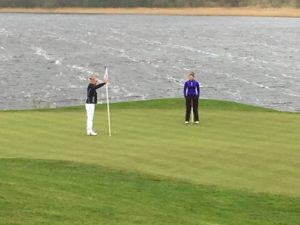 It was a great course in Lough Erne and with mixed feelings we drove back to Dublin to start the Irish Strokeplay Championships U 18.

Before our practice round we had a day for shopping, and so we did. Shopping with my Dad is fun, he is in for everything so we had a great day. That night we also had a great dinner and a wonderful hotel. Which was a little bit different compared to the Bed & Breakfast places we had seen the week before. So we enjoyed it.

After the practice round, I knew what the course in Roganstown was about. I had no expectations, being nr 56 in handicap on the list of 104, mainly Irish girls, that are used to the circumstances here. But…… I was totally in sync with myself and I outperformed: My first time under par ever, and that in such a big tournament. And not only that…. In the end I became runner up. Second place on the Irish Open U 18!!!

I was sooo happy and I could not wait for the next tournament, the Faldo series in Wales. To get there, I flew alone to Wales, were my mother was going to meet me while my father flew back to Amsterdam. I met my Mom, we had dinner, and we drove to our bed & breakfast near Bridgend. The next day I played a practice round on the Pyle & Kenfig Golf club. And after three coordinated rounds, I won!. Not that I scored well, but I new what the difference with the runner up was and we played in the same flight, so the only thing I had to do was play tactical, not take risks and stay ahead. And so I did. Yess….. back to back win. With another round under par!!